I love my people.

I always want us to be united.

Not to rehash the past, which we have moved on from but I gotta tell this story.
I am happy that we were afforded the chance to mend our broken sisterhood. I am avoiding the words ‘relationship’ & ‘friendship’ on purpose.

We shared an office when she first joined the organization. She taught me about shareit. We used to be so loud! We laughed a lot. I didn’t realize at the time just how threatening that was to some people.

Divide and rule is a thing you know! So, just before the 2017 International AIDS Conference, the organization was having its own pre-conference and because I worked with grassroots organizations, I was among those organizing logistics for the event. Long story short: I attended the pre-conference, conference, went to visit my mom for the weekend and did site visits in KZN the week after before returning to the office.
I visited places so remote that most people in the organization avoided for obvious reasons: no flushing toilets, no running water, no tarred roads and some places had no electricity. Add to that poor cellphone reception.
So after roughing it for a week, I came back to the office to find out that things had changed :
1. My deskmate had moved to another desk
2. My so-called friend was no longer talking to me
3. My travel advance had been deducted from my salary as a ‘loan’
4. The sites I had visited were phoning me, informing me that someone from the office had phoned to validate my visit to them
5. One of my projects was taken away from me, and given to my former deskmate
6. My travel claim was rejected
I think they were trying to pull a Kb on me.
Our organization was very good at gossiping behind people’s backs, plotting, backstabbing, creating cliques to bully fellow black colleagues until they resign and leave. I knew the drill! I had seen it done to G, S, T, K and C.
The worst part of this, is how everybody just carries on as if they don’t see what’s happening and how you get crucified when you stand up for your team members.
So this animosity continued until circumstances forced us to stick together, which unfortunately was too late. 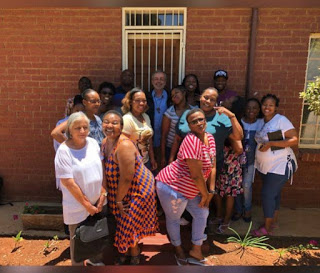 The level of racism, cruelty and total disregard for human dignity we were subjected to was of incredibly evil proportions.
The favoured clique got dismantled and eventually lost their favour. As 1 Zulu saying goes “kophela sofana!”
They, for the first time got a taste of what we had endured for years. Maybe it was God’s plan for us to go through it together. I for one am grateful that we parted on better terms.
I often wonder how things would have been, had we stuck together as black people from the beginning, no ‘crabs in a bucket’ nonsense of spying, gossiping and ladder-climbing through pulling other people down.
At some point the pettiness got to a level of screenshots from social media being sent to the bosses and stories of ‘honeymoon trips’, which were a defermation of character to say the least.
Bottom line: I am glad that I am on speaking terms with everyone, we are survivors y’all!

I love you all my black people.

I'm a dark-skinned black woman who loves life, fashion, food and books. I am a writer at heart. I am fat and fabulous. I enjoy traveling and exploring. I am creative and smart. Welcome to my world! View more posts